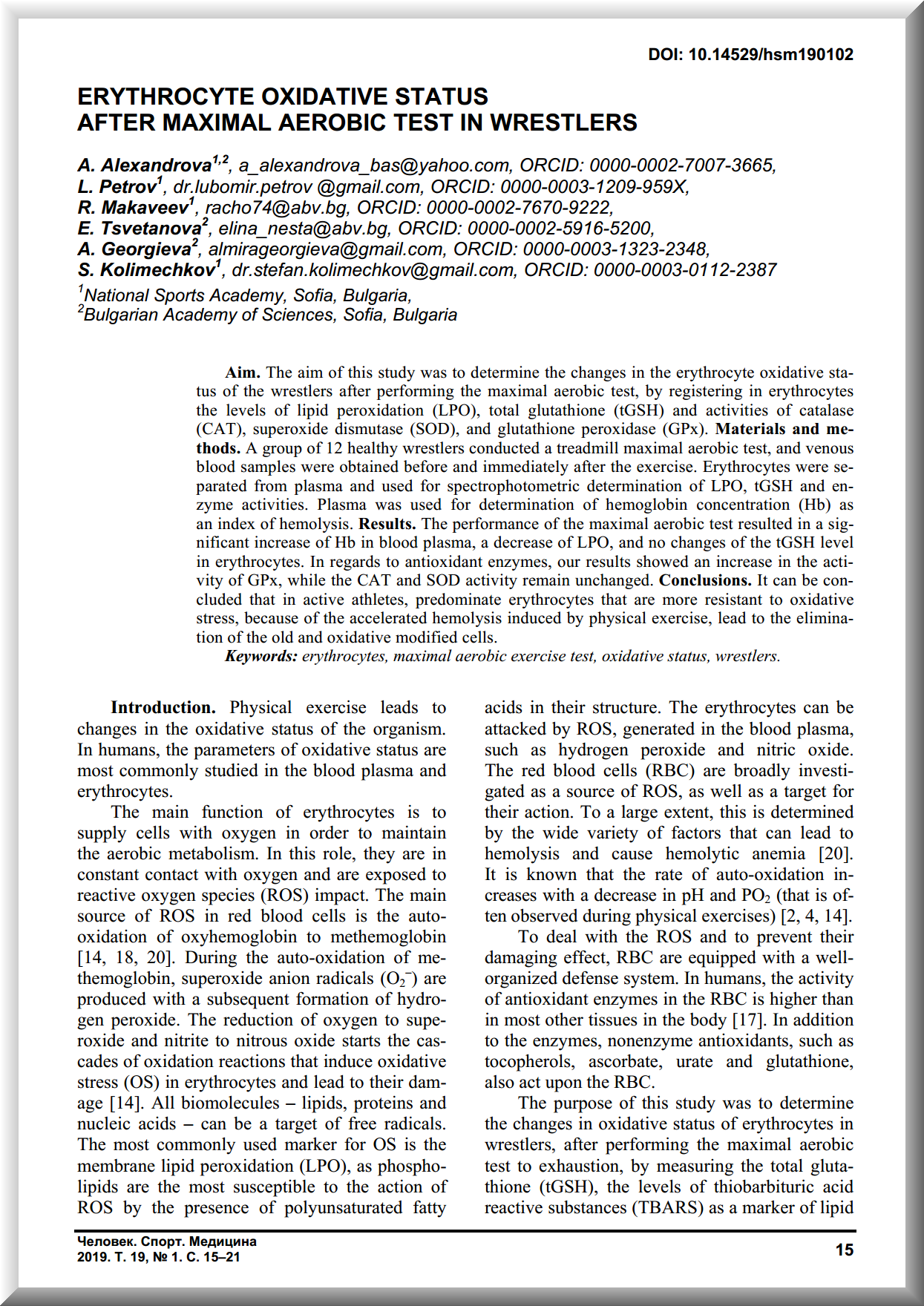 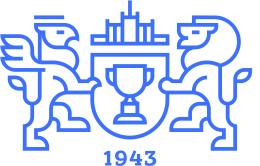 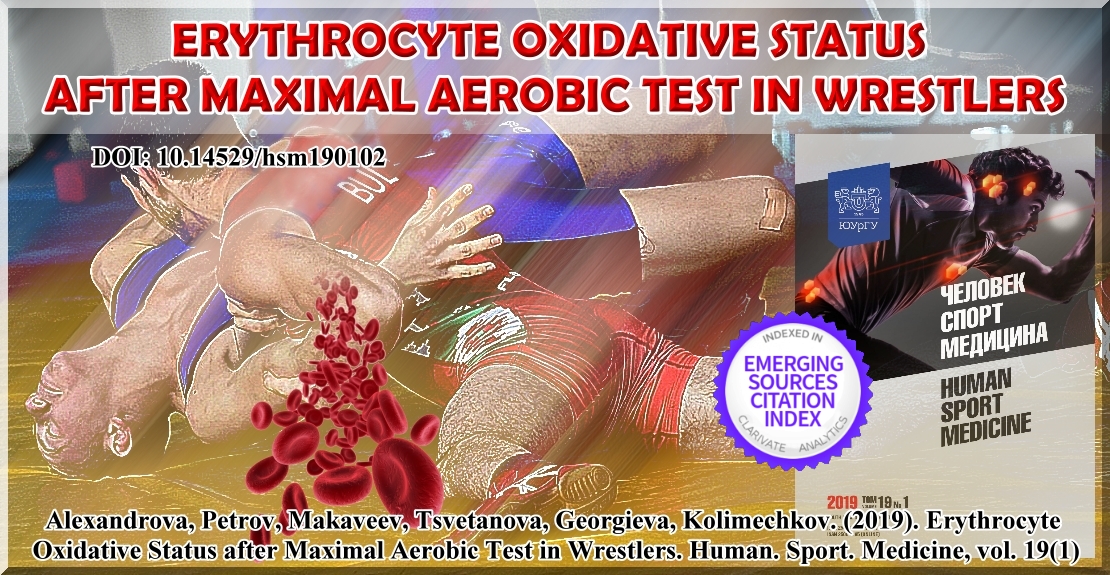 The journal (Human. Sport. Medicine, ISSN online 2500-0195, ISSN print 2500-0209) is dedicated to distributing information on the latest research and scientific work conducted by scientists and leading specialists in the fields of sports and medicine. This journal is indexed in the international database Emerging Sources Citation Index (Web of Science), and in Scopus. 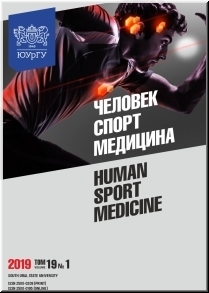 Aim. The aim of this study was to determine the changes in the erythrocyte oxidative status of the wrestlers after performing the maximal aerobic test, by registering in erythrocytes the levels of lipid peroxidation (LPO), total glutathione (tGSH) and activities of catalase (CAT), superoxide dismutase (SOD), and glutathione peroxidase (GPx). Materials and methods. A group of 12 healthy wrestlers conducted a treadmill maximal aerobic test, and venous blood samples were obtained before and immediately after the exercise. Erythrocytes were separated from plasma and used for spectrophotometric determination of LPO, tGSH and enzyme activities. Plasma was used for determination of hemoglobin concentration (Hb) as an index of hemolysis. Results. The performance of the maximal aerobic test resulted in a significant increase of Hb in blood plasma, a decrease of LPO, and no changes of the tGSH level in erythrocytes. In regards to antioxidant enzymes, our results showed an increase in the activity of GPx, while the CAT and SOD activity remain unchanged. Conclusions. It can be concluded that in active athletes, predominate erythrocytes that are more resistant to oxidative stress, because of the accelerated hemolysis induced by physical exercise, lead to the elimination of the old and oxidative modified cells.

The main function of erythrocytes is to supply cells with oxygen in order to maintain the aerobic metabolism. In this role, they are in constant contact with oxygen and are exposed to reactive oxygen species (ROS) impact. The main source of ROS in red blood cells is the autooxidation of oxyhemoglobin to methemoglobin [14, 18, 20]. During the auto-oxidation of methemoglobin, superoxide anion radicals (O2–) are produced with a subsequent formation of hydrogen peroxide. The reduction of oxygen to superoxide and nitrite to nitrous oxide starts the cascades of oxidation reactions that induce oxidative stress (OS) in erythrocytes and lead to their damage [14]. All biomolecules – lipids, proteins and nucleic acids – can be a target of free radicals. The most commonly used marker for OS is the membrane lipid peroxidation (LPO), as phospholipids are the most susceptible to the action of ROS by the presence of polyunsaturated fatty acids in their structure. The erythrocytes can be attacked by ROS, generated in the blood plasma, such as hydrogen peroxide and nitric oxide. The red blood cells (RBC) are broadly investigated as a source of ROS, as well as a target for their action. To a large extent, this is determined by the wide variety of factors that can lead to hemolysis and cause hemolytic anemia [20]. It is known that the rate of auto-oxidation increases with a decrease in pH and PO2 (that is often observed during physical exercises) [2, 4, 14].

To deal with the ROS and to prevent their damaging effect, RBC are equipped with a well organized defense system. In humans, the activity of antioxidant enzymes in the RBC is higher than in most other tissues in the body [17]. In addition to the enzymes, nonenzyme antioxidants, such as tocopherols, ascorbate, urate and glutathione, also act upon the RBC.

The purpose of this study was to determine the changes in oxidative status of erythrocytes in wrestlers, after performing the maximal aerobic test to exhaustion, by measuring the total glutathione (tGSH), the levels of thiobarbituric acid reactive substances (TBARS) as a marker of lipid peroxidation (LPO), and activity of antioxidant enzymes: catalase (CAT), superoxide dismutase (SOD), and glutathione peroxidase (GPx). The maximal aerobic test was chosen because it is widely used in sports practice for tracking the working capacity of the athletes and their training level. Due to the adequate evaluation of the functional capacity of the subjects tested, and the good reproducibility of the results, it is accepted as the “gold standard”. Therefore, the maximal aerobic test to exhaustion can be used as a standard workload to investigate the oxidative stress in athletes.

The study was performed in accordance with the Declaration of Helsinki for Human Research [21], and approval was obtained from the Ethics Committee of the Institute of Neurobiology, Bulgarian Academy of Sciences (registration FWA 00003059 of the US Department of Health and Human Services).

Twelve international level wrestlers (9 males and 3 females) took part in the study after signing an informed consent form. They completed a maximal aerobic test on a treadmill. Before the test all athletes underwent a medical examination. None of them were excluded because of irregularities in ECG and blood pressure, a history of chronic diseases, current infections, use of antibiotics and herbal, antioxidant or steroids.

Venous blood was taken (Vacuette/Li Hep) before and immediately after the maximal test.

The maximum oxygen uptake (VO2max) was assessed by a maximal aerobic test on a treadmill (H/P/Cosmos, Germany) according to the following protocol: the duration of the step was 1 min 30 sec, the initial speed was 6 km/h, and after completing each step the speed was increased by 1.2 km/h, and the slope was constant at 2.5%. The analysis of exhaled gases (O2 and CO2) was performed in real time, using a metabolic device (Jaeger-Pro, Germany).

The reagents used in the present work were obtained from SigmaAldrich (Germany).

The blood was centrifuged at 600 g for 10 min and the plasma was removed from the packed RBC. The amount of hemoglobin (g/L) in whole blood, in packed RBC, and in plasma was determined spectrophotometrically according to a calibration curve by using Drabkin’s Reagent. The packed RBC were washed twice with physiological saline and a 5 % suspension (diluted according to Hb in 0.15 M NaCl – 10 mM sodium phosphate buffer, pH7.2) was prepared. The RBC suspension was frozen, and the hemolysate obtained after defrosting was used for measurement of the level of LPO, tGSH and the activity of CAT, SOD, and GPx. Each sample was analyzed in triplicate. The single results obtained were in a good agreement and the mean value was taken as the final result.

The lipid peroxidation of hemolysate was estimated by the amount of thiobarbituric acid reactive substances (TBARS) [8] without LPO inductors (spontaneous LPO) and with 10 mM H2O2 and 2 mM NaN3 (induced LPO). The extinction at 532 nm was measured, and the amount of TBARS was calculated using a molar extinction coefficient of 1.56 × 105 M–1cm–1, and was expressed as ng malondialdehyde (MDA) per mg Hb.

Total glutathione (tGSH) level was measured according to Tietze [19]. The values were expressed in ng/mg Hb, with oxidized glutathione (GSSG) as a reference standard.

Superoxide dismutase (SOD) activity was determined according to Beauchamp and Fridovich [3] and was expressed as U/mg Hb. A unit of SOD activity is the amount of the enzyme producing 50% inhibition of nitroblue tetrazolium (NBT) reduction.

Catalase (CAT) activity was determined according to Aebi [1] and was expressed as dA240/min/mg Hb.

Glutathione peroxidase (GPx) activity was determined according to Gunzler et al. [9] and was expressed in U/mg Hb, using a molar extinction coefficient of 6.22 × 106 M–1cm–1.

The anthropometric data, along with the results of the maximal aerobic test, are presented in Table 1. The wrestlers represented different weight categories and, therefore, large variations in height and weight were observed. The BMI for female wrestlers was within the norm, and that for male wrestlers was slightly above 25.0 kg/m2 (26.5 ± 2.24 kg/m2), which is to be expected in strength sports athletes, due to the latter’s greater muscle mass. All athletes were well hydrated and had a normal average percentage of body fat (at 75 percentile) according to the American College of Sports Medicine [13]. The wrestlers showed a good aerobic capacity for men (VO2 max = 52.9 ± 3.80 mL/min/kg) and for women (VO2 max = 46.8 ± 0.95 mL/min/kg).

Table 1: Anthropometric data and results of the maximal aerobic test of the wrestlers

Table 2: Hematological data before and after of the maximal aerobic test

The results of the erythrocytes’ oxidative status are presented in Table 3. There were no significant differences between the values obtained for males and females, and, therefore, the data are presented for both sexes together. The results showed a significant decrease in both spontaneous and induced LPO level immediately after completion of the maximal aerobic test. The levels of tGSH didn’t change significantly. The individual baseline values for tGSH in the athletes tested showed large variations (minimum 1401 ng/mg Hb and maximum 3122 ng/mg Hb), which along with the relatively small number of participants could be the reason for the lack of significance in the results. The activity of SOD before and immediately after the maximal aerobic test showed no significant changes; however, great differences in individual enzyme activity between athletes before the test (min 6.40 U/mg Hb, max 18.17 U/mg Hb) were detected. The results showed a statistically significant increase of GPx after the maximal aerobic test.

Table 3: Erythrocyte oxidative status before and after maximal aerobic test

Our results indicated a significant increase of the amount of Hb in blood plasma immediately after the test. The established two-fold increase in the plasma Hb could be explained by intravascular hemolysis, occurring during the maximal aerobic test. Such hemolysis in athletes was documented during long aerobic physical exercises with submaximal intensity [15]. This hemolysis leads to increased erythrocyte turnover [16], and this is, moreover, considered by some authors to be one of the causes of anemia in athletes [15, 16]. Hemolysis may be caused by several factors, such as sheer stress, temperature, osmotic and pH changes [10]. An important factor of RBC hemolysis is the OS caused by a deficiency in their antioxidant system and/or by increased generation of free radicals [12].

In our opinion, reduced levels of spontaneous LPO are due to the fact that older erythrocytes, with more oxygenated membranes, have undergone hemolysis during exercise. Thus, younger erythrocytes with less membrane initial lipid peroxidation and higher hemolytic resistance remain in the blood.

The reduced induced LPO can also be explained by the fact that hemolysis-free erythrocytes have increased antioxidant protection. This specific claim is also supported by the higher GPx activity in erythrocytes after the performance of the maximal aerobic test, as established in this study. This may be also due to the induction of the GPx from the LPO production during exercise [22]. For instance, the performance of a graded exercise on a cycle ergometer till exhaustion by elite wrestlers led to a significant increase of SOD and CAT in erythrocytes [11]. However, the data of our study do not show significant changes in these enzymes.

Some authors [5] reported a decrease in the levels of erythrocytes LPO in people involved in active sports. This observation seems paradoxical because of elevated OS during regular physical exertion. However, in active athletes, the erythrocyte turnover is accelerated, and enhanced degradation of old and oxidative modified erythrocytes was registered. As a result, in the athletes’ blood, the RBC that are more resistant to oxidative stress predominate.

It has been suggested that the degree of oxidative stress, induced by aerobic exercise, could be time-dependent. According to FisherWellman & Bloomer [7], the submaximal and maximal aerobic loads must be of at least 30 minutes to cause significant ROS-mediated damage. It is possible that with longer duration loads (in our study, it is only 10–12 minutes on average), oxidative changes could also be observed in the membranes of erythrocytes that have not undergone hemolysis.

The performance of the maximal aerobic test with a duration of about 12 min (as in this study) is sufficient for induction of oxidative stress and hemolysis only in older and less resistant erythrocytes. Thus, erythrocytes with no LPO damages and with higher antioxidant defense remain in the blood.

Acknowledgements: This study was supported by Grant ЦРАС2/22.03.2016 from the National Sports Academy, Sofia, Bulgaria

11. Hubner-Wozniak E, Panczenko-Kresowska B, Starczewska-Czapowska J (1993) The effect of graded exercise on changes in the activity of antioxidant enzymes in blood of wrestlers. BiolSport 10:21–22

This article is also available on ResearchGate