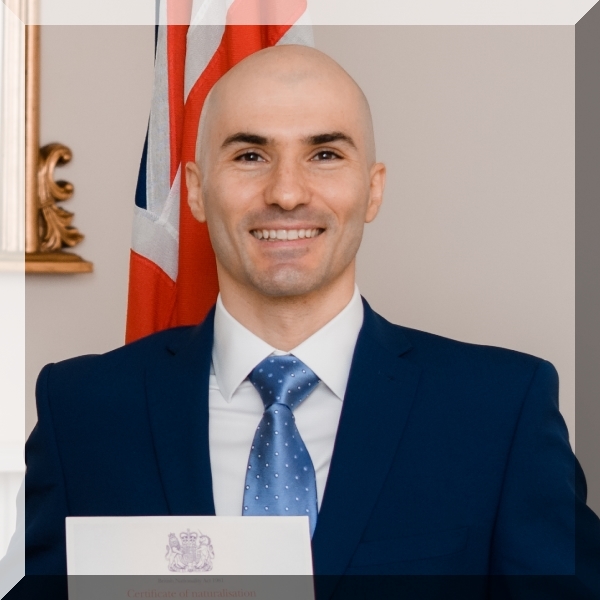 STK SPORT is the trading name of my business as a sole trader, which has been registered in the United Kingdom since 2013.

MISSION STATEMENT: To help people recognise and experience the joy of doing gymnastics and/or yoga in order to sustain a healthier and more fulfilling lifestyle.

LONG-TERM GOAL: To make STK SPORT a recognisable symbol of excellence within the health and fitness industry, based on positive individualised practical experience for every client, backed up by solid scientific knowledge, which is constantly acquired by continuing professional development.

I am a qualified gymnastics coach and I have been teaching gymnastics here in London since 2013. My real passions in life are gymnastics, scientific research, and my genuine curiosity towards slowing the agеing process. I obtained my PhD degree in Pedagogy of Physical Education from the Department of Physiology and Biochemistry at the National Sports Academy, Bulgaria in 2018. Overall, my research focuses on assessing health-related physical fitness, as well as areas within the field of sport and exercise sciences. I have been the Vice President of FIEPS Europe (International Federation of Physical Education and Sport) for Western Europe since 2021.

In line with my short and long-term goals, interests, and passion for research, I took the decision to pursue a second PhD. I am currently an MPhil/PhD postgraduate research student at the University of Greenwich, London. My project explorers the effectiveness of microcurrent electrical neuromuscular stimulation and resistance exercise on counteracting the loss of muscle mass and strength which accompanies aging.

I provide a range of services in London, mainly specialising in teaching gymnastics and yoga, and I am involved in different scientific projects as an independent scientist. In the following video, I outlined the best moments from my greatest achievement so far, the attainment of my PhD degree in 2018.

I was born in 1987 in the south-west part of Bulgaria in a town called Gotse Delchev, which is about 200 km from the capital Sofia. Just a few years later, my father was promoted to a Lieutenant Colonel (and later a Colonel) in the Bulgarian Ministry of Defence, and therefore, my family moved to the city of Sofia where I started my primary education. I was lucky enough to have grandparents who devoted their lives to teaching in the Bulgarian school system, thus, I was taught how to read and write prior to starting school. I completed my primary education at Chernorizets Hrabar Primary School No.163 in 2001, followed by my secondary education at the Professional School of Textile and Modern Design in 2006.

In 2013 I moved to London, United Kingdom, which was one of my biggest dreams, and I started working as a gymnastics coach. My teaching qualification is considered comparable to British Master's degree standard by the National Recognition Information Centre for the United Kingdom (UK NARIC). Moreover, I hold a Qualified Teacher Status (QTS) for the purpose of teaching in schools in England, and this award was made by the National College for Teaching & Leadership in 2014, which is now replaced by Department for Education and Teaching Regulation Agency.

In 2015, I started a PhD degree in Physical Education at the National Sports Academy in Bulgaria while living and working in London. In fact, most of the participants in my PhD research were primary school children from the United Kingdom. My PhD thesis focused on the nutrition and the health-related physical fitness of children engaged in artistic gymnastics, and built upon the studies which I had already carried out. In addition, I was also volunteering as a Physical Education assistant at St Edmund's Primary School in London from 2015 to 2018. As a PhD student, I had the opportunity to presented some of our studies at international scientific conferences in physical education, and sport and exercise sciences, including: the top one in the United Kingdom (the BASES Conference in Nottingham 2017, and in Harrogate 2018); the biggest and oldest one in Physical Education (the FIEP Congress in Luxembourg 2017, and in Istanbul 2018); and the biggest in Bulgaria (International Congress of Applied Sports Sciences in Sofia 2017).

In 2018, at the age of 30, I was officially admitted to the degree of Doctor of Philosophy, which I believe to be my greatest achievement in my life. Later that year, I was awarded my PhD certificate in a special graduation ceremony at the National Sports Academy in Bulgaria.

In 2020, I accomplished one of my lifetime goals, which was the obtaining of my British citizenship, after passing the Graded Examination in Spoken English with distinction, as well as the Life in the UK test. During my British Citizenship ceremony, I took the Oath of allegience to the Crown, and the Pledge of loyalty to the United Kingdom in the Town Hall of the Royal Borough of Greenwich, and then I was given my certificate of naturalization. Later that year, I also received my British Passport.

I am a member of the American College of Sports Medicine (ID # 862559), the European College of Sport Science (ECSS-ID: 26528), British Gymnastics (the UK Governing Body for the sport of Gymnastics), and I hold the Level 3 British Gymnastics Coaching Qualification, and the Personal Trainer Practitioner status in the UK. I also met the criteria and standards of EuropeActive, and, therefore, I was admitted to the European Register (EREPS), and I am currently holding the status of Level 6 Personal Trainer, Advanced Health and Exercise Specialist.

Journey of a Lifetime

In 2020, at the age of 33, I accomplished one of my lifetime goals, I obtained my British citizenship.

This has been the biggest and most important event in my life to date, my official public PhD defence. On 30 May 2018, at the age of 30, I was officially admitted to the degree of Doctor of Philosophy (PhD). I completed a 3-year PhD programme at the Department of Physiology and Biochemistry at the National Sports Academy in Bulgaria, which led to a PhD Degree in Pedagogy of Physical Education.

In 2017, I presented scientific research at an international conference for the very first time. This was at the 12th FIEP European Congress, organised by the International Federation of Physical Education. This conference was very special to me, as I was nominated for the FIEP New Leaders Programme by my PhD supervisor Professor Alexandrova, and the FIEP Executive Board accepted this nomination, and covered most of my expenses to go to Luxembourg and take part in this conference.

In 2012, I was ranked 4th in Bulgaria at the 2012 National Gymnastics Championships. This was my best achievement at national level in my sports career. 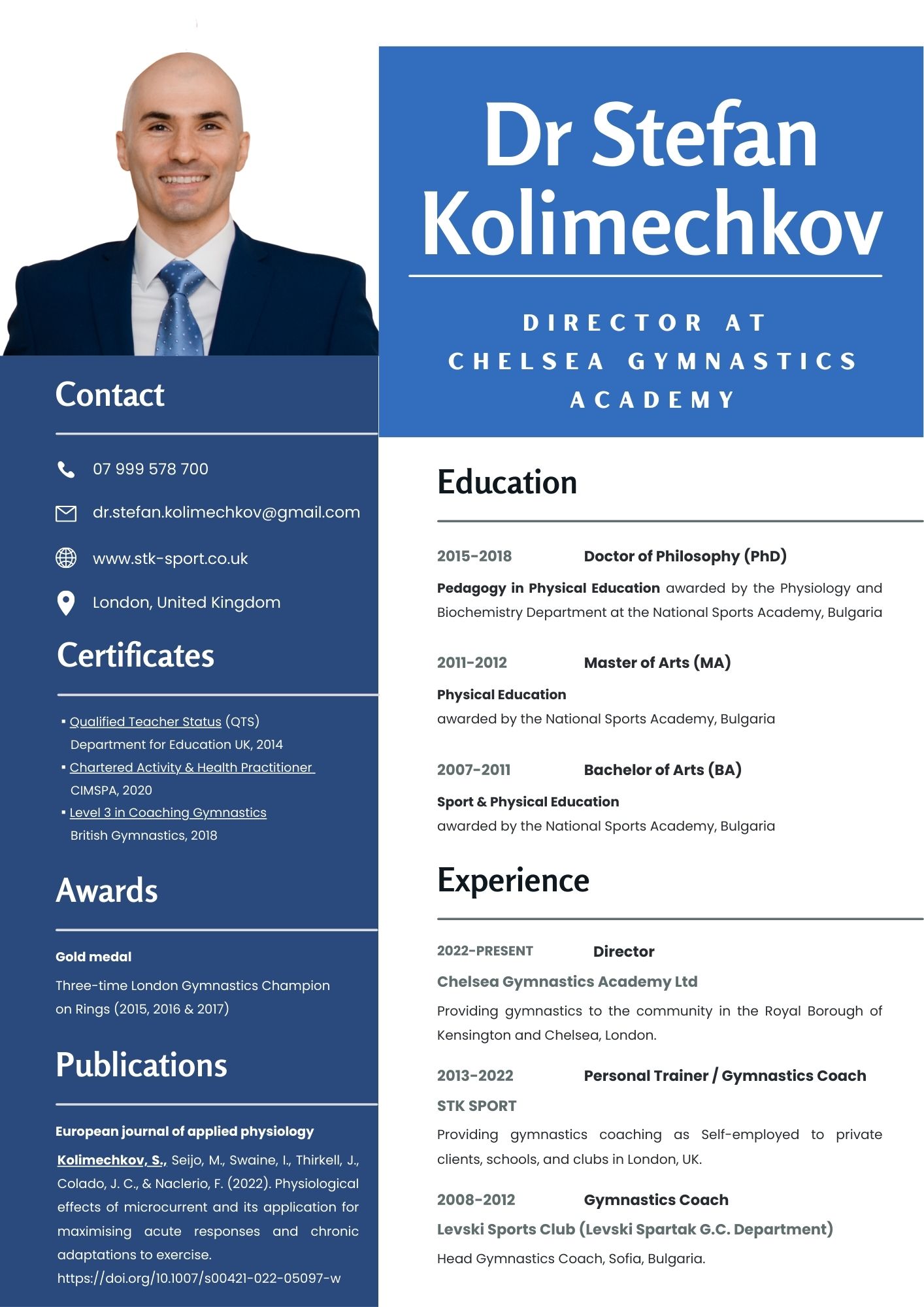